I met Michelle over the phone before she moved here from out of state. We were discussing her options with the different insurances I take and whether or not home birth was right for her. After much talking and an interview, Michelle decided I was her midwife and even better, her insurance would cover it! Michelle had her previous 2 babies in the hospital and was one of those amazing mamas who also completed her natural births in the hospital setting! While her experiences were better than most, she knew she wanted something different and this was only confirmed throughout her pregnancy. Michelle seemed to be having a different pregnancy than her previous daughters. This baby seemed to want to do things their own way and even more exciting was Michelle was waiting until birth to find out what she was having! It was fun trying to guess who little one was going to be (our bet was on a boy because her pregnancy was SO different)!!

Michelle had a wonderful end of pregnancy and took each moment in stride, enjoying it! When I saw her for her 39 week 5 day visit, she mentioned the previous night that she was convinced she was in labor and was going to call me and then randomly, it all stopped. I told her she may end up doing it again and could quite possibly truly go into labor soon! As I was feeling baby’s position and listening to heart tones, Michelle had a couple of contractions. She mentioned that these were the first contractions she had had since the more serious labor pattern the day before. By 8pm that night, she texted me to put me on standby and let me know that I had “magic hands” because she had been having more consistent contractions since her visit with me 😉 I told her to call me when she needed me! I laid down around 9pm and an hour later I received that magic call from Michelle! I headed towards her home and arrived to find Michelle bouncing and walking around happily. I was very impressed with how joyful she seemed, she was so talkative and I loved watching her move! I was almost convinced I had arrived too soon but within the hour, Michelle was in the tub and moaning quietly through each contraction. It became clear that she was getting close as she began to shake with each contraction and felt like she was “ready to be done.” This is music to every midwife’s ear because it means transition is here and delivery is imminent! I LOVE it!!! It was amazing how different Michelle was in transition from active labor. I remember at one point her asking me how much longer and I reminded her that she was a very different Michelle from the Michelle 30 minutes previously and was close. With a few position changes, Michelle’s water broke and intense pushing contractions commenced! I quietly coached Michelle as she pushed her beautiful baby into this world. Within minutes, baby was on mama’s chest and Michelle tearfully announced that she had her first BOY!! He was so handsome and looked just like his little sisters and daddy. Daddy woke up baby’s sisters and Nora and Elsie jumped up and were ecstatic about their new baby brother. For the next two hours, I had the honor of watching this family bond and getting to know this sweet little boy! Simon Dewey joined us at 11:59pm on December 14th weighing in at 7#11oz! He really wanted to be born on the 14th and made sure he cut it super close 😉 Thank you Simon for allowing me to be present for your beautiful birth! 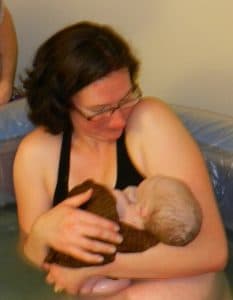 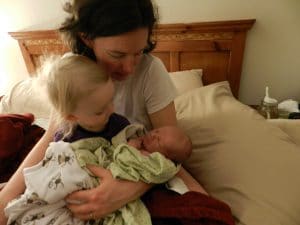 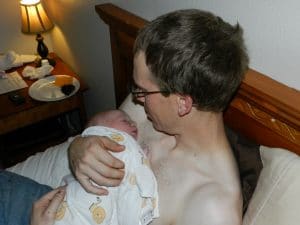 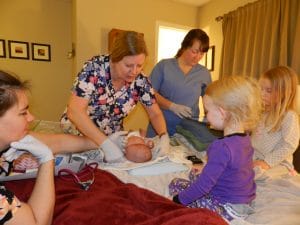 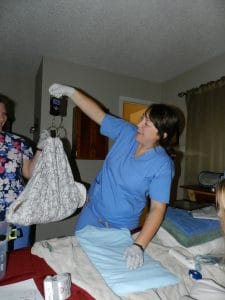