From prenatal care to postpartum and newborn care, we're here for you and your family every step of the way.

From start to finish we help make sure your labor process at home is as low stress and comfortable as possible.
Read more -->

Waterbirth is a beautiful, gentle transition to the world for your little one and a safe, pain management tool!
Read more -->

We assist in making sure that you & your new baby are getting the proper care throughout your pregnancy.
Read more -->

We provide 2 postpartum/newborn home visits - We’re here to provide care to help you and your baby adjust to life after birth!
Read more -->

CNM’s are so much more than pregnancy and babies! We also provide, and specialize in, well women services!
Read more --> 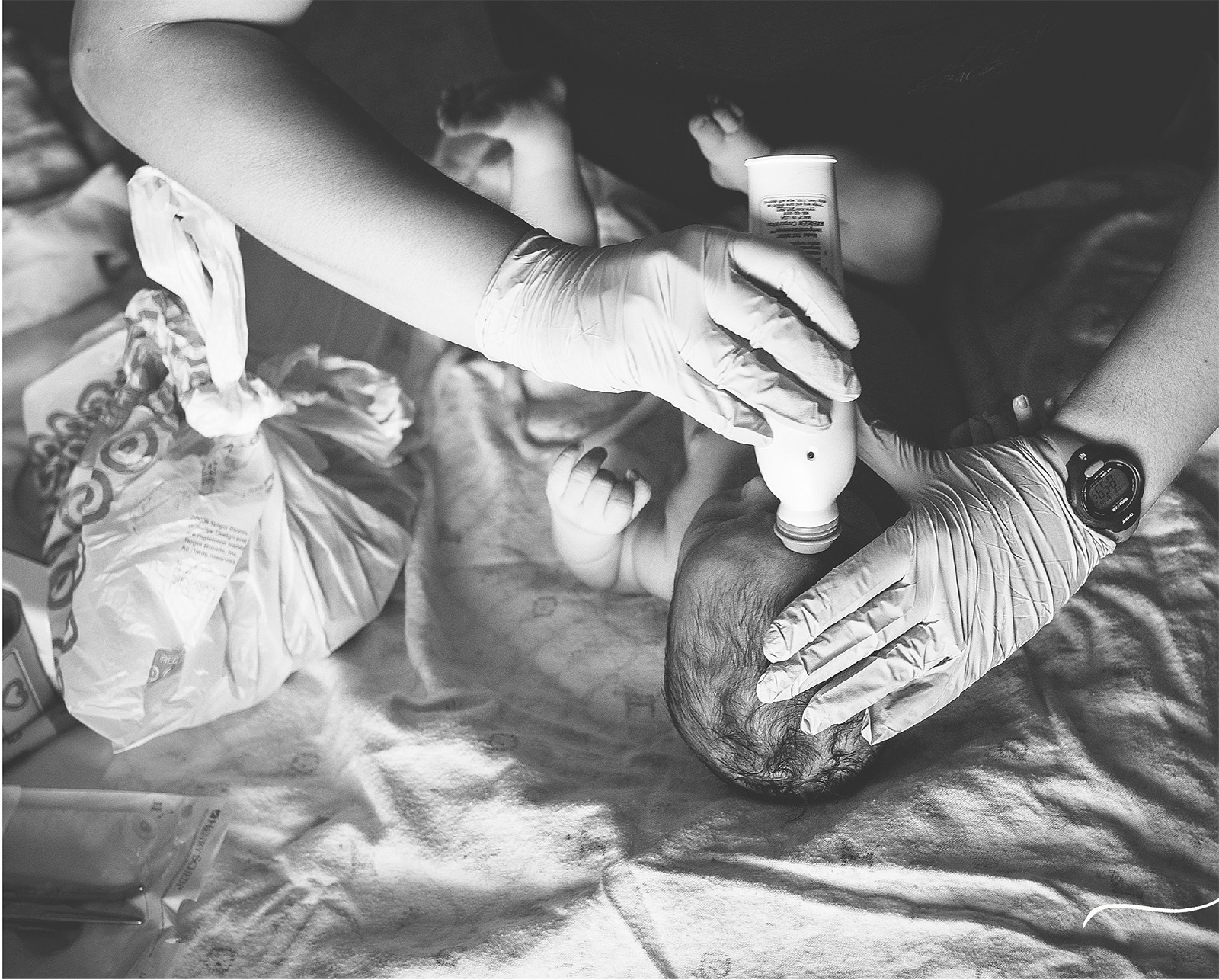 What is a Certified Nurse Midwife (CNM)?

A certified nurse-midwife (CNM) is an individual who is educated in both nursing and midwifery and possesses certification through the American Midwifery...

CONTINUE READING Expand
... Certification Midwifery Board (AMCB) according to the requirements of the American College of Nurse-Midwives (ACNM). CNM’s provide primary healthcare to women of all ages including:

A certified nurse-midwife (CNM) is an Advanced Practice Nurse who is licensed to practice in the state of their choice. Most CNM’s start as a Registered Nurse with their Bachelor’s degree and choose to complete their Master’s in Nursing with a specialty in Midwifery. No other midwife can use the term Certified Nurse-Midwife or CNM unless they have completed this education and passed national boards. Essentially, we are a type of Nurse Practitioner with a specialty in pregnancy and women’s health care.

A CNM in Colorado is regulated by the Department of Regulatory Agencies: Professions and Occupations. The Colorado Nurse Practice Act determines how a CNM in Colorado may practice and the laws, statutes, and regulations that go along with that specialty. In Colorado, we are considered INDEPENDENT healthcare practitioners and must follow the standards set by our professional affiliate. This affiliate for CNM’s is the American College of Nurse-Midwives (ACNM). Their website may be reached at www.midwife.org. Feel free to peruse their Standard-Setting Documents for more information on CNM’s or you can ask me!

How is a Certified Nurse Midwife different from a Professional Midwife?

The primary difference is in the educational pathway. Direct entry midwives (DEM’s) may have completed a formal educational program or have what is considered substantially equivalent education, which likely...

...involves an apprenticeship with another midwife. After this, they must pass the North American Registry of Midwives (NARM) written exam. Direct entry midwives may have titles such as CPM (Certified Professional Midwife) which is an additional program they have completed; and/or LDEM (Licensed direct entry midwife) or RM (Registered midwife) depending on whether their state’s process is licensure or registration. DEM’s are legal in many states but not all. In the state of Colorado, CPM’s are required to complete an accredited midwifery educational program or obtain a substantially equivalent education approved by the director in order to obtain certification. Then they must pass the midwifery examination given by the North American Registry of Midwives (NARM).

A CNM is usually a registered nurse first. She has also completed a master’s in nursing degree at a university that specializes in midwifery education. She must then pass an exam and be certified by the American Midwifery Certification Board. This grants them the title “CNM” for certified nurse midwife which they must recertify with continuing education every 5 years. CNM’s can practice legally in all 50 states. CNM’s provide pregnancy care, primary care and women’s health care to women of all ages. They are independent health care providers. This means they consult, collaborate and refer appropriately to other health care providers when indicated but do not require any type of supervision or collaborative practice agreement.

The bottom line is that CNM’s and DEM’s are all midwives. Unlike physicians, all midwives have extensive education and training in normal female life processes such as the menstrual cycle, pregnancy, birth, and beyond. We can treat some of the abnormal or will refer appropriately if a concern is beyond our scope, but we specialize in keeping women and their family’s normal and enjoying life.

How do you prepare for emergencies?

I and all of my assistants are NRP certified and trained in assisting in childbirth. We carry the necessary supplies for resuscitation of both mom and baby. We never expect the worst but always prepare for it...

...for this reason, I always try to have at least two assistants at every birth. At your 36 week visit, we will have your prenatal visit in your home where we will discuss an emergency plan and I will give you all the necessary numbers and contact information you may need.

If transportation is needed, a vehicle can be used or an ambulance may be called. I will go with you to the hospital and will call ahead with all the necessary information the hospital may need to prepare for your arrival.

Do you provide water birth services? Is it safe to have a water birth?

Yes and yes! Waterbirth is a beautiful, gentle transition to the world for your little one! Please see the article below on waterbirth in the US! The Journal of Midwifery & Women’s Health released a study in June 2014...

whose sole purpose was to evaluate the safety of waterbirth. The study not only validated the safety of waterbirth but even on many aspects proved that the outcomes of waterbirth may be equivalent , if not improved, among women who are low risk and healthy, when compared to land birth! Waterbirth is associated with greater maternal satisfaction, increased likelihood of an intact perineum, decreased incidence of lacerations or episiotomy use and reduced postpartum hemorrhage. Here are some of the stats:

While there are risks to water birth these risks seem to be minimal and are comparable (if not improved) to conventional or land birth. Waterbirth supports the midwifery model of care and the client-midwife relationship while maximizing the opportunity for physiologic birth. If you would like more information on water birth, please feel free to talk to me, I would love to answer your questions!

Why did you choose to be a CNM instead of a CPM?

Sometimes I feel these decisions are made for you. I volunteered at Memorial Hospital throughout my high school career initially believing I was going to...

... become an OBGYN only to change to nursing after I realized the docs had no time with their patients! This was a deal-breaker for me as the patient interaction was what I desired as a practitioner. During my nursing career, I discovered there were different types of midwives and once you became a nurse you could only obtain your masters in nursing to become a midwife. So I would have had to choose to be a direct entry midwife before I went to nursing school and therefore, not gone to nursing school. However, I believe my calling was always to go to nursing school and eventually become a nurse midwife. I was given a high-quality education at Frontier and do not regret my decision to go for higher education. I believe as a nurse-midwife I am an excellent balance between medical knowledge and midwifery knowledge. I like to say my degree gives the client the best of both worlds!

What do I do if I think I'm in labor?

If you think you are in labor or your water breaks, you may call me and I will ask several questions to determine where you may be and listen as you labor. If I feel you are progressing, I will come to your...

...home to determine if you are in active labor. This includes a vaginal exam to determine your current dilation and effacement. The only other vaginal exams I require are if you feel the urge to push or if I suspect a variance from normal. Otherwise, my motto is to keep everything coming out and down than up and in! It is important to remember to “surrender” yourself to your labor. There may be a temptation to resist or fight it but I have found the more relaxed a mother and her support can remain, the smoother her labor is. You may choose to labor how you wish and where you wish as long as safety is maintained! I am here to help and serve you!

You may call me at any point in your labor if you have questions or feel you may need me.

Is home birth a safe option?

Yes, home birth is a safe option for women who are low risk and whose births have been planned to be at home as well! Currently 1% of births occur at home or in freestanding birth centers and this number is on...

Recently, an article was released in the Journal of Midwifery & Women’s Health by Midwives Alliance of North America (MANA) which continues to support the safety and the value of planned home birth. This article, which was release in February of 2014, covers data collected from 2004-2009 and encompasses 16,924 planned home births. Women who had planned home births had considerably fewer interventions, less augmentation or induction of labor and less operative or assisted vaginal or cesarean birth. Planned home birth was also associated with higher maternal satisfaction and is more cost-effective than hospital birth. If you like numbers, below are some of the amazing statistics from this article!

Overall, these findings are consistent with the research that shows that planned home birth is safe for healthy, low-risk women when attended by a midwife which results in positive outcomes and benefits for both mom and baby!

Fill in the form and we’ll answer your questions as soon as we can and it may even end up on our frequently asked questions page!

Tiffany is a highly knowledgeable nurse midwife who provides wonderful quality care in a peaceful way (especially for an anxious first-time mom-to-be)! As a health care provider myself, I knew I did not want a hospital birth, but care with a strong medical basis was important. Tiffany was exactly what we were looking for! She provided exceptional prenatal and postpartum care! I always felt heard during our sessions and felt comfortable asking Tiffany anything and EVERYTHING! She was extremely encouraging during my delivery and had an excellent team right alongside her

My husband was so hesitant with having a home birth at first, but when we went to our consult with Tiffany she put all his worries at ease! After we left there we felt no need to even go to the other consult we knew this was the right fit for us! Lauren delivered my sweet little guy and it was such a wonderful experience. The support and encouragement I received was something I’ve never found anywhere else. These ladies go above and beyond and are with you every step of the way! I highly recommended them and I plan to come back for our next baby!

When we started looking into doctors and birth centers, we quickly realized that our options were pretty limited here in the Springs. When we found Tiffany she listened to our story and we quickly connected with her, her energy, and all that she shared with us. I walked out and immediately knew she was the one to guide us on this journey! On the day of delivery she showed up and two and a half hours later our little girl entered the world. She was brilliant and provided relief when I needed it most, made me feel safe and secure, and strong and capable the entire time. I am so appreciative!

Have questions or concerns? We'd love to meet
with you and help put your mind at ease!