I met Kristi later in her pregnancy when she decided that after 3 babies in the hospital, it was time to do something different! Though our time together was supposed to be brief (mama had a history of having her babies at 38 weeks), baby decided he needed just a bit more time to cook and mama ended up going past her 41 week date! Needless to say mama was a bit shocked and ready for baby to come more and more with each day past her due date. I saw her in the office on her exact 41 week date and we swept her membranes to see if we could encourage labor. Though I do not do this very often, it is very useful for those labors that just need a little push and often works within the first 24 to 48 hours for those babies who are ready to come! I sent Kristi home after the sweep with labor signs and symptoms and when to call me.
The call came at 3am (seems to be the hour of truth for me!), it was Kristi and she sensed labor was coming quickly. I arrived around 3:30am to find Kristi calmly talking and her tub filling up. I listened to baby (who sounded great) and took a set of vitals. Baby was moving well and mama was doing great with her support system. I noticed when Kristi would sit that her contractions would space out and lose their intensity. Though I’m sure she wanted to kill me in the moment, I asked Kristi to keep upright and moving until it was time to get in the pool. Once she was upright and moving, her labor began to progress quickly and I could tell her work was paying off! Within an hour of arriving to her home, Kristi was quietly moaning through each contraction. Transition seemed to be making its appearance as she began to shake and cry just a little. At this time, it is not uncommon for a mother to tell me how much it hurts or how badly they want to be done. This is always a good sign because it means we are close! Kristi’s husband was a delight to have around and I could tell watching his wife was hard and he tried to lighten the mood occasionally with a joke here and there. Though I’m not sure if Kristi always appreciated it ;)! At 5pm, I remembered looking at one of my assistants and saying that I felt birth was imminent within the hour. Kristi kept me posted about all the changes she was feeling and baby moving down. Around 5:30am Kristi felt the urge to push but wanted to be checked to make sure the cervix was gone. Surprisingly, I found her to be 8 cm. Though the cervix can move out of the way with the urge to push, I often ask my moms if it hurts to push and if it does, it can mean the cervix is not ready to move and pushing needs to stop for a bit until the cervix moves. It is important not to push against a cervix that is not ready to dilate to prevent swelling of the cervix, this can set back a labor in a major way! Around 6:12am, Kristi’s water broke and this was replaced with a VERY intense urge to push! Now we were in business! Kristi pushed for 11 mins, which was the longest she had pushed with any of her children so she was wondering why, I thought she was doing great! As baby crowned, I watched as his features presented over the perineum and thought to myself that he looked like a chunker! I coached Kristi’s friend who wanted to catch baby on what to do and noticed the cord loosely wrapped around baby’s neck. I encouraged her to allow baby to deliver through the cord and I slipped it over his body as he delivered. Jen (Kristi’s friend) helped baby out of the water as I helped Kristi turn over so we could put little, or not so little, guy on her chest! He made a lovely cry within seconds of birth and pinked up quickly. As I handed baby to mama, I noticed how big he was and guessed he was well over 9 ½ pounds. D’Artagnan Martin was born at 6:23 am weighing in at a juicy 10# 4oz! When dad announced the weight to mama, she burst into tears! It made sense why she had to “push for so long” as this baby was 2 pounds heavier than her previous heaviest baby! It was fun to see what her babies grew to when they were given their full time to gestate (though Kristi may have something else to say about that 😉 )! Thank you so much D’Artagnan and Kristi for allowing me the honor of being present for your pregnancy and birth, I had a blast! 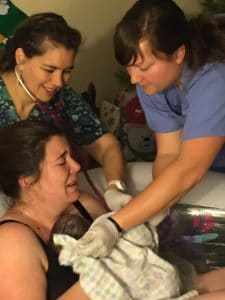 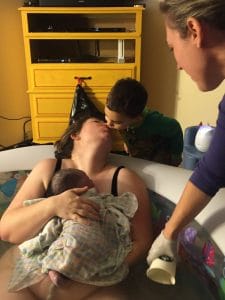 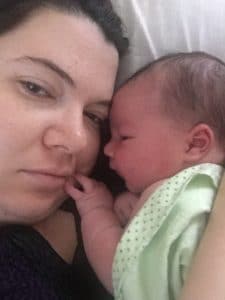 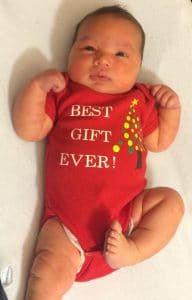