I met Ashley in her second trimester after she decided the amount of money she had to pay out of pocket to her OB was completely unreasonable and she wanted something different for her and her baby! I encouraged her to apply for an insurance plan that would cover the cost of her birth and reduce her out of pocket cost and she was approved! To say she was relieved was an understatement! Now that she was on a plan I took, her care was covered and she’d get the home birth she knew she wanted! Ashley’s pregnancy progressed beautifully and quickly, we could not believe it when we were at her 36 week home visit! Baby and mama were both doing so well! At her 38 week appointment, Ashley mentioned that she had had an episode of intense contractions that lasted for quite a while before going away and briefly thought she was in labor. Fortunately, it slowed as her family was coming for the birth that weekend right before her 39 week due date! She told me the Monday before they came that she wanted baby to wait and we assured her if that was her plan, baby would likely listen! I was also impressed as normally, my first time moms deliver about halfway through their 39th week or later. I told her it was unlikely she’d go before then!

Imagine my surprise then when I received a call from Ashley early Wednesday morning around 5am letting me know she had been in labor since 11:30pm the night before! She told me her contractions were around 5 minutes apart and lasting about 60 seconds but in the brief 5-8 minutes conversation I had with her, she had had 3 contractions! I told Ashley that it sounded like they were much closer than 5 minutes and that she needed to get to her friend’s house where she was planning on having her baby!  I decided to get up and get ready for the day as I was also supposed to be in clinic for the whole day. About 40 minutes later, I received another call from Ashley and she felt things were really progressing and needed me to come. I left my home around 6pm and headed to Ashley’s home. With first time mamas, it’s always tough to know exactly when it is time to head into the birth! You don’t want mama to feel like a watched pot but you also don’t want her to panic about her midwife not being there for the birth! About 15 minutes into my drive and 15 minutes before I was to arrive at her home, her friend called me to let me know Ashley was fighting the urge to push. I gave her some pointers to help her cope until I got there and stepped on the gas pedal. I arrived at Ashley’s friend’s house around 6:30am to find a beautiful laboring first time mama on her hands and knees! Her pool had not been set up and it was clear she wasn’t going to get it! She didn’t even have time to purchase a sink connector because she thought she had more time! I helped her move on the tarp so her friend’s floors stayed somewhat clean and we tucked pads under her to make her more comfortable! Her friend set up a video system so all her family and a friend could watch since they would not be making it to the birth after all! Ashley labored like a champ and began to push stronger with each contraction! I encouraged her to work with her body and push when the urge was strongest. She did amazing and baby began to crown with each subsequent push. Finally, I could feel baby moving quickly as she began to deliver the head and I told Ashley not to push and let her body do the work so she didn’t tear. With ease and calm, baby’s head slowly and intentionally delivered! With the next push Ashley delivered the rest of her baby! I was able to pass baby through her legs so mama could pick her sweet girl up! She brought baby to her chest and marveled that she was finally done! Baby was a beautiful, petite love and was thoroughly transitioned to the outside world within seconds of birth and because mama listened so well, she managed not to have any lacerations during her birth! It is very possible not to have any tears even with your first baby and Ashley was proof! Baby Kinley joined us at 7:10am weighing in at 5#10oz, welcome sweet love and thank you for allowing me to be present for your birth! 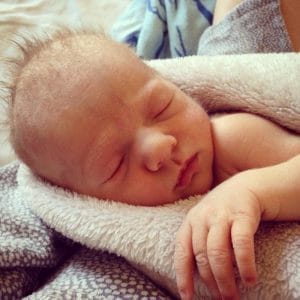