Margaret came to me early in her second trimester after she found out she was pregnant with her fourth baby! She had had 3 previous home births so this was nothing new for her! The exciting piece was that now, her home birth would be covered by insurance! Margaret had an interesting pregnancy history with one of her pregnancies going as much as 6 weeks overdue (though she and her midwife both knew the original due date was off) and her other pregnancies were as much as 10 days “overdue” so naturally we assumed once we had a due date, that Margaret would be close to seeing her 42nd week of pregnancy. Imagine all of our shock when at 39 weeks exactly, Margaret began to have labor signs!

I received a call from Margaret’s husband Herman around 10:30am that Margaret seemed to be in active labor and was ready for me to come. Because her last 2 previous labors were done in under 4 hours and she had been laboring since 8:30am, Herman and Margaret were both expecting this labor to be just as fast if not faster. One of Margaret’s fun unique facts about her “faster” labors was they both came out OP (sunny side up) but her first baby which was a 12 hour labor delivered after a 12 hour labor (which is not uncommon for a first baby). When I completed her 36 week home visit I mentioned to her that her baby was OP and they told me about her previous two babies coming out in this way and we decided it must just be the way her babies were meant to come through her pelvis! When I arrived to her home, we began setting up the pool anxious to get her in and comfortable as her contractions intensified. My team slowly arrived and we supported Margaret in any way she needed knowing it could be a quick labor. Within 30 minutes, the pool was finally full enough for her to get in, so we helped her get comfortable and continued filling the tub with boiling water from the stove since their hot water heater ran out. About an hour and a half or so after our arrival, Margaret’s children and best friend arrived to their home. Margaret was beginning to feel the urge to push but when she did, I could feel the anterior portion of her cervix getting in the way! After a few pushing contractions, no movement from the cervix and lack of a strong pushing urge for Margaret, we decided it would be best to stop pushing and take a break. Shortly after, her children and friend left to give her some quiet time. I talked with Margaret about her options and suggested she get out of the pool and sit on the toilet to help move that anterior portion of her cervix. She DID NOT like the idea AT ALL (and let me know it, nicely though) but knew it was her best chance at having her baby. After about 30 minutes, Margaret got up the strength to get out of the pool, we helped her to the toilet and left her and Herman in their room to work together. Within about another 30 minutes, Margaret began to have stronger urges to push and was terrified she’d have baby on the toilet! I checked her again but could still feel a very small part of the anterior cervix in front of the baby’s head but we were making progress! I encouraged her to labor just a bit longer on the toilet until the urge became unbearable and then I promised we would move! Within 3 contractions things were VERY intense and Margaret asked to move. We warmed up the pool again while she labored over a chair and she was finally able to get back in! The next contraction began and I encouraged Margaret to push hard with that contraction and as she pushed, her water broke! We were starting to get somewhere! With the next contraction baby moved swiftly into Margaret’s pelvis and with two strong pushes, baby’s head delivered! One the next push, the rest of baby delivered and I helped Margaret bring baby to her chest! We were all so relieved after Margaret worked SO hard that she was done!! They were waiting until birth to find out the sex of the baby and were all pleasantly surprised that they had another girl (they were so sure it was a boy)! Baby Cassiana was born at 3:45pm weighing in at 7#9oz welcomed by her mom and dad, two big sisters and one big brother, congratulations family! 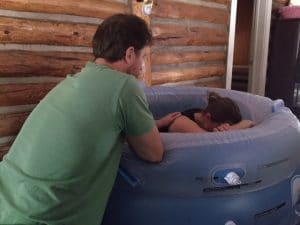 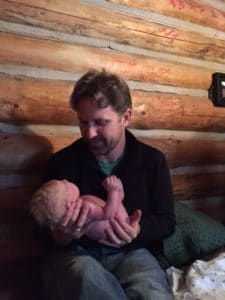