I met Emilie after she discovered she was pregnant with her first baby. She based her due date off her last menstrual cycle but there was some concern about how accurate the date was so we decided to do an early US to confirm dating and it was a good thing we did because baby was due almost an entire month before we originally thought and Emilie was further along than she originally thought! So we adjusted her dates and prepared for an October baby. Emilie’s pregnancy progressed normally and we expected her to slip right past her due date and even past her 41 week mark. One week over her due date, I received a text from Emily that her water broke. She wasn’t having any labor though so we decided to have her get some rest and if labor had not started by morning, we would talk about interventions if needed.

The next morning I texted Blaine, Emilie’s husband, to ask how things were going and if she was in labor and he reported that yes, she was in labor and they were calling in their doula. I started my clinic day as usual and waited for the call but was surprised when I finished my day and an appointment that evening that by 9pm, I had not heard from them all day. I asked if I could come check on mom and baby to make sure everyone was doing ok and shortly, I was told I could come. When I arrived, I was told Emilie’s labor had slowed and she was only having contractions every 5-10 minutes which was completely different from her labor that morning of every 2-3 minute contractions. Emilie still seemed in high spirits though and both she and baby were doing great! At this point Emilie had not slept since the day before and had been in labor for 27 hours already! She was so strong! We decided to do a check and I was pleased to find her cervix completely effaced and with some gentle stretching, her cervix went from 4 cm dilated to 7! So we had a cervix that was willing and ready, we just needed her uterus to catch up! I rubbed her down with some clary sage essential oil which is great for helping increase and organize contractions and we did a dose of labor enhancer herbs as well. I told them to repeat this cycle until she was in active labor and that I would return once she had reached this phase. I left them in good spirits and went home to rest. I was not surprised at all when I received a call just two hours later that Emilie was feeling tons of pressure and an urge to push. I headed over with my team and found Emilie to be actively laboring and doing so well though she was tired. She was getting ready to head into night #2 with no sleep so I knew it had to be catching up with her! I allowed Emilie to listen to her body and push when she felt the urge but after an hour of aggressive pushing, I noticed there was no change in baby’s station and wondered what was holding baby back. We decided to do another cervical exam and that’s when I found a soft but currently immoveable anterior lip of the cervix. I was disappointed for her as I knew this is what was slowing everything down! Her contractions then began to space out again to every 5 minutes and we were thinking of everything to help her find a great pattern again to move that cervix. After a little rest, I discussed doing some more herbs but Emilie felt they made the contractions too hard and didn’t want to do them. I said walking around might be what is needed at this time even though she was so tired. She decided she wanted to pace her front porch because she was hot and needed a break, this sounded like a great plan. She and Blaine labored together outside while we all listened from inside and I could tell things were progressing as she kept telling Blaine how badly she wanted to poop! I was getting excited that soon we could push again! Finally, Emilie wanted to move to the bathroom to labor and as she continued to breathe through her contractions, I could hear she was resisting the urge to push. I told her to once again listen to her body and she began to push aggressively with each contraction and there was a noticeable change in baby’s station! She pushed for about 20 minutes standing and squatting to push and sitting down in between for a break but her legs were getting tired and she was losing her energy. We made the difficult decision to lay down and push (which is something many moms don’t want to do because they hear about how “wrong” it is, but sometimes it is necessary when a mama is this tired)! Once Emilie was settled on her back, her very first push brought the very top of baby’s head into view and everyone got very excited! We pushed a few more times on her back and then I had Emilie move to her side to help baby maneuver the pelvis. Another 70 minutes of pushing this way and one very exhausted mama, daddy was able to deliver his sweet daughter and place her on Emilie’s chest, she was finally done! Almost 35 hours and just over 2 hours of pushing later, Emilie brought little Eilish into the world at 4:39am! Baby weighed in at 7#7oz and was such a sweet prize! Congratulations to this new little family and thank you so much for allowing me to help you bring your first child into this world! 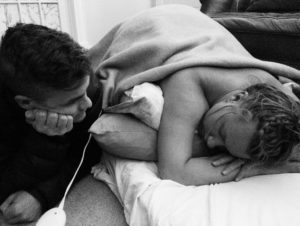 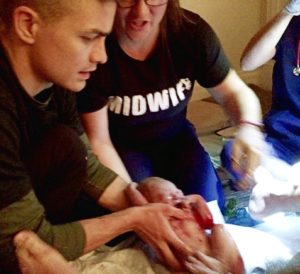 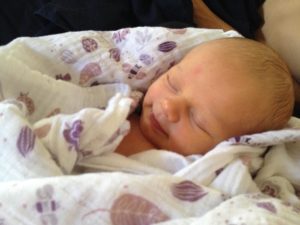