I met Megan about halfway through her pregnancy after she had heard about me from a friend who was already seeing me. She had her previous child with an OB in the hospital setting and while the experience was not awful, she knew she wanted something different this time around and felt like a home birth could offer that. Her pregnancy progressed as expected and as we had assumed, she passed her due date. We were excited to see when baby would be joining us as Grandma was visiting and Megan truly hoped her mom could be present for the birth as well as for some time after to enjoy her new grandbaby.

I received a text from Megan on Thursday the 19th letting me know her contractions seemed to be coming closer together than before and thinking she might be in early labor. I told her to keep me posted and waited until the call came. Megan and I talked on the phone briefly after that to discuss when another phone call should be made and I had wondered if I would hear from her in the next 30-60 minutes. Just 30 minutes after we talked, she called me back to let me know her water broke and she felt it was time for me to come. I packed up my things and started heading her way knowing I had an hour-long drive ahead of me. About 20 minutes before I arrive, I received a text from her friend letting me know she was feeling more pressure and occasionally an urge to push but was in good control. I picked up my pace as quickly as I could and arrived 10 minutes earlier than anticipated which was good! I set up my space and checked on both mom and baby who were going so well and talked with Megan about how she was coping. She explained that she occasionally feels the urge to push at the top of the contractions so I told her to give in as she felt she needed to. Over the next several minutes, Megan slowly began her pushing efforts and I could tell she was moving baby down as her sounds changed! She started reporting more burning sensations and I could feel baby’s head when she pushed so I coached dad on what to do to assist in the delivery of his little one and encouraged Megan to keep pushing! With the next push, Megan brought baby to crowning and the next push baby’s head was out! Megan took a short break before another contraction came to help deliver the shoulders. I talked dad through catching baby and as baby delivered, he reached in and lifted baby out of the water! Megan turned over and took little one into her arms, she was done! Everyone anxiously awaited the announcement of the gender as both mom and dad looked and found out it was a girl! Sweet little Chloe joined us at 10:52pm as pink and beautiful as ever! She weighed in at 7#11oz and was perfect for her new family! Thank you sweet girl for allowing me the time to get to your speedy delivery, what an honor it was to serve you all! 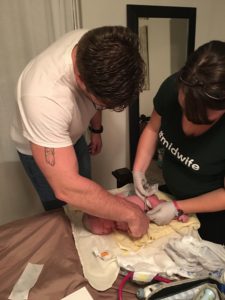