I met Katherine early in her pregnancy after she had been referred to me by a friend. She was a local Bradley instructor and though she had had a previous natural hospital birth (on Pitocin none the less), she was ready for a Colorado Springs home birth and very excited! During her pregnancy, there were a few annoying things that seemed to threaten her ability to have a home birth but after passing all the tests like a champ and baby growing so well, she was right back on track and we were stoked! After 28 weeks, Katherine’s pregnancy progressed beautifully and as her due date neared, she became more anxious to be done! Since the beginning of her pregnancy, Katherine had said she was going to deliver on the 18th of August! But as her last menstrual period date passed on the 11th, she began to feel anxious to deliver before the 18th! We talked about her options but I encouraged her to wait and give baby the time she needed, it would all be worth it in the end!

I received a call from Katherine at 6:40am that I needed to cancel plans with my friends for the evening and come see her because it was time! I had just ordered dinner with my husband and we were in his car so I explained that I would get my dinner to-go, drop off my husband and get my car and be on my way to her! Her husband cracked me up as he offered to pick me up but I still had to get my car and they were on the opposite side of town for me (and I’m pretty sure Katherine needed him more!). I finally got in my car around 6:50pm and headed to their home in Peyton. It was at least a 30 minute drive. I was nervous as I drove, worrying about how fast she would go. I finally arrived at 7:20pm and found Katherine in bed laboring. She was still chatting and her natural tendency to want to know what was going on and maintain control was in full swing 😉 I knew as soon as she hit transition that would change! We set up the room as Katherine labored. She moved around a lot from the bed to the tub and back into the bed again which was great for baby’s positioning. Things seemed to intensify around 8:30pm and Katherine got back in the tub. While she was in there, nausea and vomiting set in and I was hopeful we were looking at transition. Katherine asked me to check her as she was exhausted and ready to be done! I found her at 9.5 cm and told her she was so close! After about 45 minutes in the tub, she wanted to get back in bed so we helped her get comfortable. She began to have urges to push and lifted her leg to do so but I could tell baby was too high and her contractions had spaced out to every 4-5 minutes and were only 40-60 seconds long! I was trying to figure out what was going on as we rubbed clary sage on her belly and tried B&B herbs to help bring her labor together. I figured if her water broke things would progress but I hate breaking waters unless it’s necessary and have never had to do it before! I held out and decided to implement some other plans. Around 9:55pm, I decided that Katherine should get up and walk the stairs to help bring baby down as I was concerned she was wasting her energy pushing when her contractions were so spaced out! She reluctantly got out of bed and got down the first flight of stairs and I immediately noticed a difference in her labor pattern. Things really intensified! Katherine was so done and exhausted and wanted to get in the tub but we feared it would slow down her labor. She laid at the top of the stairs too exhausted to stand anymore and then with the next contraction she rotated onto her knees and said “you guys are crazy if you think these contractions are too spaced out!” (well, they weren’t any more now that she was up)! Almost immediately her water broke and I felt baby’s head move down quickly! I told her if she wanted the water that now was the time, she slowly made her way to the tub and as she climbed in, the next contraction hit and she immediately began pushing! As baby’s head birthed, I realized her arm was around her head and now it made sense why baby wasn’t moving down when she was pushing on the bed! With the next push, baby was born! She brought little one to her chest as her family and daughter came in to meet her. The look on Katherine’s face was priceless, she was so exhausted and I think she couldn’t believe she was done! She was stunned it was over! Within a few seconds, Katherine came to and realized the sweet baby on her chest and studied all her features. Sweet Autumn was born at 10:11pm weighing in at 7#9oz, just a little smaller than my other big babes! Welcome to the world sweet girl and thank you all for allowing me the honor of being present at your child’s birth, what an incredible blessing! 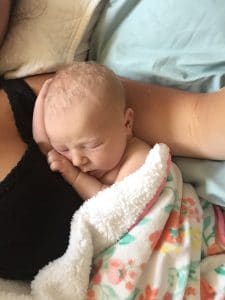 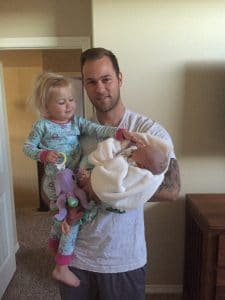