Baby Alice Greets the World in Her Home Birth!

I met September early in her pregnancy when she found out she was pregnant! She knew she wanted a home birth since all her other babies had been born at home and she had had fabulous experiences! September’s due date was especially fun since she was due in September but her history of delivery around 38 weeks made us all wonder if she would even make it! September’s pregnancy progressed normally with no concerns and at her 36 week home visit, we discussed her birth probably being right around the corner! We made her appointment for just over 38 weeks and joked that she probably wouldn’t even make it!

I received a call around 3:10am from September’s significant other Scott letting me know September’s water broke. She had never had this happen to her so they were curious was to do! Once I determine baby was doing well and the fluid was clear, I encouraged September to get some rest and wait for labor. One hour later September called to let me know labor was progressing and she could not sleep! I encouraged her to track her contractions for the next several minutes and to call me back once she had tracked a few. I tossed and turned and barely fell asleep when I jerked awake at 6am and realized I hadn’t heard from September! I grabbed my phone and turned it on, terrified I had missed a call but nope, nothing. I checked my text messages and there was a screen shot of a contraction tracking app she was using and her pattern made me jump out of bed! She was contraction every 2 minutes for 60-90 seconds! I called as I was getting dressed and she reported she was also feeling pressure! I raced down to my car and was out the door within minutes of seeing her text. I arrived at her home around 6:25am and found September laboring beautifully! She had been moving around her room and had been in and out of the pool. I could tell things were progressing as she had tears in her eyes. I checked in on both mom and baby, both who were doing very well. Eventually, September got back in the pool as her labor continued to progress. Each contraction seemed to increase in intensity and September became more vocal and I sensed she was going through transition and nearing pushing. At one point, September told us she couldn’t go on anymore! We all knew we were getting close! Candace McCollett supported September with Scott by her side, it was a beautiful picture! Finally, around 7:44am, the urge to push overcame September’s body, and she gave in with strong efforts! Baby began to crown and September stayed strong even through the burning she was reporting. Ten minutes and three contractions later, September brought her sweet baby girl into the world! This baby was such a gymnast in utero she had the cord around her neck twice and wrapped around her body between her legs as well! She was a busy baby! Sweet Alice was born at 7:54am weighing in at 6#7oz; she was welcomed by her mommy and daddy and four siblings! Such a beautiful labor and birth, thank you all for allowing me to be with you during this very special journey!! 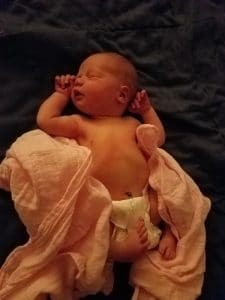 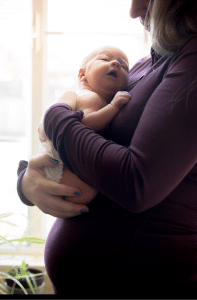