I met Jade halfway through her pregnancy and knew we would be a great team! Jade and her husband were military and from the first moment I met her family, I knew I would love every moment with them!

Jade is one of those amazing mama’s who accomplished a natural birth in the hospital setting! Where pain meds and numbing options are so readily available and easy to get, I am constantly amazed at how well these women resist these options and opt for a natural birth for them and their babies! She labored at home as long as she could and arrived at the hospital at 8cm! Though she was able to labor naturally, she was not able to get up and move around and had to remain on the monitor system which made her labor painful and in her words she “felt out of control, screaming and crying.” She wanted something different this time and had prepared herself for a calmer, natural birth at home. Throughout our time together, I encouraged Jade to labor in a way that felt comfortable to her and not hold anything back. Even noises are perfect and healthy! I told her we’d help keep her sounds low and she would be able to do the rest! Jade’s pregnancy progressed beautifully and there were few to no problems. Jade was very active doing crossfit all the way up to her last week of pregnancy and at her 40 week visit, I sensed a shift in her demeanor and knew it would not be long before we would get to meet little one.

At 41 weeks and 0 days at 3:30am, I get a call from Jade’s husband that Jade is in active labor and they were ready for me. I arrived around 4am to find a VERY calm, Jade standing next to a filling pool laboring quietly. I almost second guessed if it was time because she was SO calm and collected! We opted to do a vaginal exam and to our shock, she was 8cm! What a different woman standing in front of me than the one described with her first labor! I was immensely proud of her! We finished getting the pool filled and I called my team in. Jade labored quietly in the pool as everyone arrived and made every step look so easy! *Now, I have to mention here something that was very interesting with Jade’s labor. Some women have multiple layers to their amniotic sac which can sometimes cause their water to “break” multiple times. When I arrived, there was water on the tarp next to the pool and she told me when she was throwing up, her water broke, I recorded SROM at this time. However, she had no leaking fluid after that and when I checked her, there was still a bag over the baby’s head! About an hour later, she said she felt something “moving down” and upon palpation, I told her it was just her bag which had not broken yet. A few seconds later, another SROM was noted. Another hour later things seemed to be intensifying and Jade again felt like something was “moving down.” I placed my hand on her bottom and noted ANOTHER bag at the perineum which then “broke” seconds later. Needless to say, her water broke 3 times and the third time was the charm as that’s when baby’s head finally came down!* After all the water breaking fun, Jade finally felt a strong urge to push and gave it her all. She was calm through the whole process and at 6:13am on 9/14/15, I was able to pass little Kelly onto her mommy after such a great labor! Kelly came into this world weighing 8#4oz and had APGAR scores of 9 and 10 (which is rare at this altitude!). She was a strong sweet little girl who was SO ready to meet her mommy and I was honored to be part of her home birth! 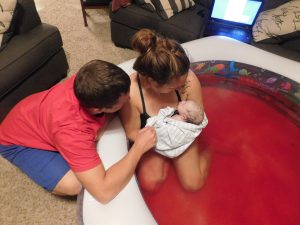 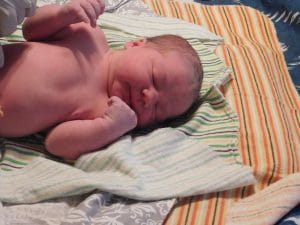