I met Stella shortly after opening my practice. She was looking for a home birth as she was pregnant with her 6th baby and knew her labors were quick and worried she would not make it to the hospital in time. She had already done one home birth with her last baby and loved it, so naturally, this was an easy decision for her!

Stella had a fun pregnancy that was SO incredibly different from all her others. She had symptoms she rarely had with her other babies and towards the end, she knew this baby was going to be something different and so special! Stella had an unfortunate history of delivering at 37 weeks and the last few weeks of her pregnancy leading up to that date were stressful and caused her a considerable amount of worry. We would often have encouraging sessions and office visits reminding her how capable she was of carrying this baby to full term and that it was the system that failed her, not her body! With one prelabor false call at 37 weeks and 2 days, Stella began to trust her body more and more. Every week we had another office visit, Stella would tell me she couldn’t believe she had made it, she had such an active uterus and it seemed baby could come at any moment! Of course, I could believe it, because I knew she was capable! As the weeks continued on, we finally hit her 41 week visit. At this point, this was the longest she’d ever carried a pregnancy! This baby was VERY comfortable and not going anywhere anytime soon and I loved it, I was so proud of Stella!

At 41 weeks and 4 days, at 3:30am, I get a call from Stella’s husband that this was the “real deal.” After so many uncertain nights of whether or not labor had commenced and worrying about missing the delivery, I was stoked we had finally made it! I arrived a short time after to find Stella on her hands and knees and calmly laboring with her husband. It was beautiful. I could tell by her sounds that we were getting close so I contacted my team and encouraged them to head my way. It seemed like a minute later that Stella told me she felt like she needed to push! At this time, her doula and photographer had arrived so I was grateful everyone she wanted with her had made it! With one big push, her water broke (and soaked poor hubby, not sure how I stayed dry!) and with another smaller push Ewan was born!! As I helped dad hand Ewan off to Stella, I noted how heavy he felt and predicted he would be her biggest baby at well over 8lbs. Stella settled into her bed and began taking in all the beautiful sites that are her son as I began the cleanup process. My team arrived 20 minutes after the birth to help me clean, I apologized I could not get them there sooner, she was so fast! I was honored to be present to welcome little Ewan Gillivray Michael into the world and witness his home birth story on September 8, 2015 at 4:54am weighing a beautiful 9lbs8oz and ready to meet his mommy who so faithfully carried him for 10 months! 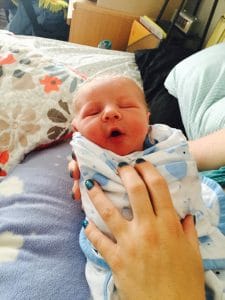