I had the pleasure of meeting Tiffany midway through her second trimester after she made the decision that a home birth was going to be a better option for her and her family. Her first baby was delivered via c-section after she had been diagnosed with pre-eclampsia and the induction methods they were giving her did not work. She knew she wanted a VBAC and she felt that the home environment was going to be more conducive to her success. Tiffany’s second pregnancy progressed normally and as we finished up her home visit at 36 weeks, she grew increasingly excited that her baby could come any day (she gave baby permission at 37 weeks though I told her she’d likely have her baby in March since she was due so late in February ;)). Each week we both got more excited to meet little one but her due date came and went and at her 41 week visit she jokingly blamed me for still being pregnant since I told her she’d go in March! We decided to strip her membranes to see if that would encourage labor and I told Tiffany to keep me posted of anything changed.

On Tuesday morning (just 15 hours after her membranes were stripped), Tiffany told me she had been up with bad cramping and couldn’t sleep any longer. She felt she was in early labor but didn’t want to get too hopeful. I told her to keep going about her day to stay distracted and let me know if anything changed. I didn’t hear from her until 1:15pm when she told me the contractions were getting more consistent and intense! We were thrilled it seemed labor had found her! At 4:45pm, Tiffany asked if she could get in the pool and told me her current labor pattern. I told her to go ahead and do that and keep me posted about how she felt after she’d been able to be in the pool for a little bit. At 5:30pm, I received a call from Dwayne (Tiffany’s husband), letting me know Tiffany was definitely in active labor and was maybe feeling the urge to push occasionally (though I could hear in the background her telling Dwayne she just wasn’t sure). I decided to head that way just to be safe. When I arrived at 6pm, Tiffany was laboring beautifully in the pool and I could tell was in transition. She was so concerned she wouldn’t make it because she was so exhausted and wanted a break so badly, sounded like transition to me for sure!  The only catch was she was feeling an intense urge to push! We decided to do a check just because she was concerned it wasn’t time and I found her to be 8cm dilated! I understood the urge to push and we talked about changing up her position to her hands and knees or kneeling to help move the rest of her cervix. She stayed in that position for about 30 mins and felt it made the urge to push stronger so we turned her on her side and just kept flipping from side to side, kneeling and reclining back in hopes this would help baby move down more. The urge to push was becoming impossible to resist by 7:30pm when her water broke. Things seemed to kick up another notch as she began pushing with every contraction and could not stop herself anymore! We all prepared for baby’s arrival and helped Tiffany into some kneeling lunges to open her pelvis. She switched back and forth with one leg up and pushing and finally, I could feel baby crowning! I called dad over to help catch and with the next push, Tiffany brought her sweet baby into the world! Dwayne gasped as he got to see his son for the first time and held him as I helped untangle baby from his cord. Mom turned over amazed she was done and baby was placed on her chest where he immediately began looking for his mama, calm and beautiful! Baby Zaiden was born at 7:59pm weighing in at 8#0oz! He had the sweetest pudgy cheeks and was so long! Welcome to the world sweet love, thank you for allowing me to be present with your family for this special moment! 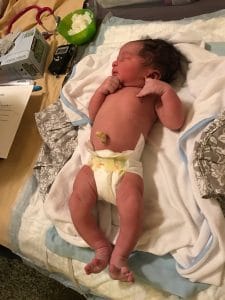 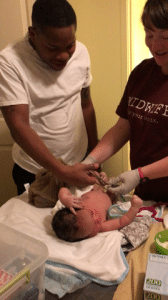 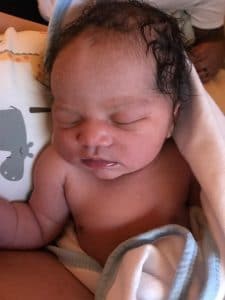