Robin came to me after having had 4 babies in the hospital setting and decided that with her 5th and final child, she wanted to have a home birth and do things more naturally than before. Each of her pregnancy and deliveries were so different and often out of her control so she decided this time, she wanted to do it her way as much as she could! Robin’s pregnancy progressed wonderfully other than some nagging nausea and vomiting that would NOT go away though she managed it so well! She had given birth to her previous children at such different times in their pregnancies that it was truly anyone’s guess when baby would come (though she went to almost 42 weeks with one that came naturally)!  We assumed that because of her history, she would likely go close to 42 weeks but she decided to try and stimulate things with a membrane strip at 41 weeks but I couldn’t reach her cervix! It was like baby was saying “NO!” haha! We decided to skip stripping her membranes and wait for natural labor!

On Wednesday, Robin let me know she was losing a lot of her mucous plug and was curious if this was any indication her labor was going to start soon (though she didn’t have this with any other pregnancy)! We waited patiently and by 11:30pm that night, things were picking up! Robin called me to let me know things were getting closer to 5 mins apart! I told her to watch them for an hour since they just started being more consistent and call me back then. Exactly one hour later, Robin called me into her labor! She was so nervous I wouldn’t make it since she lived in Pueblo but I encouraged her to get in the pool to relax and I would be there soon! I arrived at 1:50am to find Robin laboring well in the pool (though she kept telling me she was doing terribly, she wasn’t)! I listened to baby and checked on mom and both were doing great. I could tell Robin was in transition when I arrived because she kept telling me she couldn’t do it any longer and that she was done! Of course, we reminded her of how strong she was and that she was already doing it and would soon be done! We sat with Robin as she labored and before we knew it, her water broke and she started pushing! With two contractions and just a few strong pushes, Robin brought her sweet baby into this world in the calm of her home! Little Zachary was born at 3:12am on 4/13/17 just a few days before her longest pregnancy! Robin had often torn with her other deliveries but because of her self-control, she was even intact after delivering her biggest baby yet at 8lbs12oz! Welcome to the world sweet Zachary thank you to you and your family for allowing me to be present with all of you! 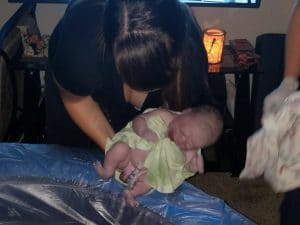