I met Lindsey via email as she was moving to Castle Rock from out of state. We chatted briefly over a week and finally decided a home birth was perfect for her! Lindsey was having a sweet surprise baby, her last baby was just 7 years before and this baby was truly going to be a special blessing!

My first visit with Lindsey was her 36 week home visit. Normally the following visits are few and go quickly but for some reason, little one needed more time to “roast” as her mama put it and decided not to come until 42 weeks and 0 days! Two mamas in one week both waiting until their 42 week dates to have their babies, I loved it! Lindsey had a few episodes of pre-labor before she went into labor and we tried to optimize these times to encourage labor but baby was insistent she have more time and after a couple nights, mama (and myself) were content to allow baby whatever time she needed. Lindsey’s mom came into town for the delivery thinking Lindsey would deliver sometime around 40 weeks, baby had her own schedule! Grandma had to reschedule her flight and decided she wouldn’t go home until at least a week after baby delivered. The real call finally came at 4:20am the day after I stripped Lindsey’s membranes (sometimes it works!). Baby had decided she wasn’t due in November but was actually going to be a December baby! I arrived around 5am to find Lindsey still in early labor but moving around the room and laboring so well! I called in my team and listened to baby, everything was going well! I stayed next to Lindsey for a while until it became clear that she needed her space. We all decided to go downstairs while she labored upstairs (she was used to doing that on her own in the past as she had had all her previous baby’s in the hospital). Lindsey was in and out of the tub quite a few times as it seemed to give her some relief however, it did this unfortunate thing where her contractions would space out to every 6-9 minutes every single time she got in, no matter how active her labor was before she got in the tub! I told Lindsey to holler when she was ready for me to come up and check on her! A couple of hours later, I got the holler and headed upstairs. I encouraged Lindsey to let me know when she felt the urge to push but she was having a hard time figuring out what that felt like. The only piece of advice that seemed to work for her was that it should feel good to push. She tried a few minutes of practice pushing with squatting and her water broke! We moved from the floor to the toilet and while in that position, things seemed to really intensify! She begged me to get back in the tub and I told her whatever she wanted! She climbed in the tub and got a few minutes of relief but then began to push with more strength. I helped hold her top leg up while she pushed and this seemed to help. She kept telling me how much it hurt and that it shouldn’t be taking this long (she was very close and doing amazing ;)). Seconds after this statement she hollered at me that baby was coming and BAM, baby was out! SO FAST!! I knew she was close based on her last statement and it could not have been truer! Her entire family (all 4 kiddos, hubby and grandma) surrounded Lindsey and baby in the tub and oooo’d and ahhhh’d over their new sweet one! Little one was amazing lifting her head and her eyes open so big! We helped mama into her bed and got them both cozy. Baby weighed in at 8#0oz and mama and daddy settled on Simone Hadassah for her sweet name. All in all, a beautiful amazing birth for all of us!! I was honored to be a part of this brief moment in this family’s amazing history! 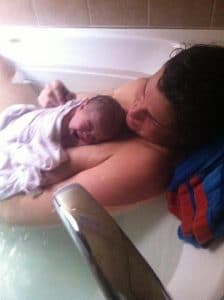 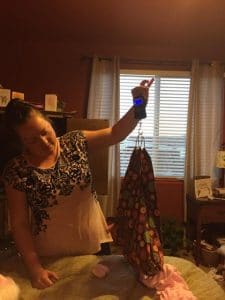 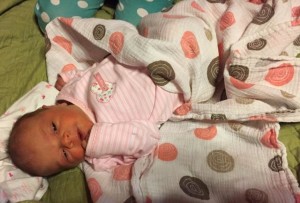