I had the opportunity to meet Jana very early in her pregnancy when she was considering assisting with home births. We had a great first meeting and she later told me she was pregnant and wanted a home birth with me! I was honored as I love being present and watching first time mamas enter motherhood! Jana’s pregnancy progressed beautifully and she did wonderful even when she didn’t feel like it! Towards the end of pregnancy, Jana had a few concerns about blood pressure issues and headaches but we found they were linked to stress and not her pregnancy health which was a relief. Still there were occasional concerns about pain management in labor (which is completely common for any first time mother who has not experienced labor) but we had a plan in place and I had zero concerns about Jana being able to cope with her contractions!

Jana was due on the 19th and both she and her husband felt this was going to be the day she delivered. On the morning of the 18th after I had finished up with Renee’s birth, I received a text from Jana’s husband that she had been contracting consistently and wanted to know when to call me in, I gave them some parameters and ran to meet a friend for breakfast. I knew this was risky as things could progress with Jana but I needed to see this friend and hoped I could catch a nap later! I finished up with my friend around 11:30am and went home to sleep. I was asleep all but one hour when I got the call from Jana’s husband that they were ready for me to come. It seemed like Jana was in transition when I listened in so I hurried to their home. Upon arrival Jana was laboring beautifully and I quickly set up and checked on mom and baby who were doing so well! I reassured Jana’s husband that everything was normal as I could tell he was nervous! And why wouldn’t he be? They’ve never done this before! My team arrived over the next couple of hours as Jana labored and I was surprised that she had not felt the urge to push as she seemed to be in transition for a while. After a couple of hours, we decided to check her progress. I was pleased to find her at 6cm but knew we had another transition to get through and Jana was reporting that she was so tried. I told her she was doing so well coping with each contraction and changing positions frequently, I was so impressed as she was a natural, it was as if she’d done this a thousand times before! There were a couple of times between 10-11pm that she told me she couldn’t do this much longer. I willed her body to be strong for her and continued to pray for strength as her labor was hard and she had gone through another “transition.” I knew we were getting closer though as she wanted to give up and go to the hospital and that is often a small sign of transition but we wanted to avoid cervical exams unless absolutely necessary so we continued to allow her body to labor. My team and I gave her some space to continue laboring and when it seemed like she was losing her strength, we would come in and lift her spirits. As the 11 o’clock hour was rolling by, I could tell my mind was getting weary from being awake for so long and only getting an hour nap in. I decided to have my team care for her while I briefly rested before I jumped into other things to try. I asked her to take a shower to see if water would help her relax and I headed downstairs. I decided once alone to call another midwife colleague to help me think better. Her suggestion to me, after telling her we had tried everything, was to put mama in exaggerated left sims with a pillow under her leg and allow her and dad to cuddle in quiet. I figured I was willing to try anything because I didn’t want mama to give up even though she was so exhausted! Once I got upstairs, I helped Jana into this position which I know she hated but we had to try it! When I helped Jana into bed, she asked me to go to the hospital, I told her I wanted to do a cervical exam before I took her because I needed to know she wasn’t going to deliver on the way there but she didn’t want that so we decided to wait.  And secretly I knew in my gut we were getting close because she was so ready to be done, a sign birth may be near! We closed the door and left them in quiet. I listened to her contractions as she labored upstairs and my team and I chatted downstairs. It wasn’t even 10 minutes before her husband called to me and said that Jana needed to push! I was so relived this was finally it for her and she could be done soon! We came upstairs and helped Jana into a good position for pushing and sure enough, with that first push, I could see the top of baby’s head! Jana pushed valiantly from 11:30pm until baby’s birth at 12:25am. I was so relieved she could do something knowing it was making progress for her! Slowly but surely, baby emerged as daddy supported mama. Finally, with one big push, Jana delivered sweet Rebekah and brought her to her chest! She was done and had completed her birth Just a couple of hours sooner than 24 hours, a fantastic labor and speed for a first time mom! Once she was done, I could see that she was so grateful. She told me that in the moment she was so mad at me for not taking her to the hospital but of course, when it was all said and done, she was so glad we didn’t! Little Rebekah was born at 12:25am on 6/19/16, making her daddy a father on Father’s Day! She weighed 7#12oz, thank you for allowing me to care for you during this special time and for being patient with yourself, baby and me, I knew you could do it! 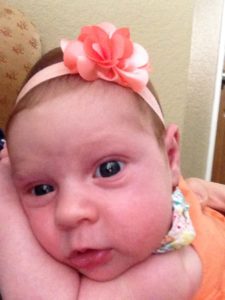