Tiffany’s story is so fun and unique because she had had her daughter in a birthing center inside of a hospital and was SHOCKED to find that the only options here was home birth with a midwife or hospital birth with an OB. She was amazed that she had such extremes to choose from and when we met I knew that she would need some time to come around to the idea of home birth! When she decided home birth was the way for her to go, there were still several times she would talk to me about how shocked she was that she as having a home birth! It was hysterical when the revelation would hit her! She had a marvelous pregnancy and handled the nagging pregnancy symptoms that followed her for the entire duration of her pregnancy. Tiffany was stunning and I really enjoyed getting to know her over the course of her pregnancy. I could tell we were cut from the same cloth 😉. As Tiffany passed her due date, no one was truly too surprised since she went passed her due date with her daughter but as she passed the point she went to with her daughter, anxious anticipation started to set in and Tiffany was DONE!!

Fortunately, time was running out for little man and Tiffany let me know labor had begun. She told me she wasn’t coming to another office visit until this baby was born and he decided he’d listen and just a few hours before her next appointment with me, labor began! She kept me updated throughout the night and by 5am it was clear it was time for me to come! When I arrived, I was bummed to see that in the pool, Tiffany’s contractions spaced WAY out from where they were when I was texted to come. We decided to get Tiffany out of the pool to see if activity would bring contractions closer together and with a dirty look from Tiffany to me 😉 LOL she got out of the pool. We went to the toilet where contractions quickly picked back up. Tiffany had asked to get back in the water but we were worried it might prolong things if we did. It was truly tough to know what to do! We finally decided the pool would be good again but as Tiffany stood, her water broke and as I was encouraging her to walk to the pool she told me the baby was coming! I dropped to my knees and with Tiffany’s help, she caught her sweet baby!! This baby threw me for a MAJOR loop!! Tiffany admitted she could feel the top of baby’s head before I encouraged her to get back into the pool but she didn’t say anything to me! So, in hindsight it made sense why things felt like they went so fast right at the end!! Sweet Cullen was welcome by his family at 6:29am weighing in at a healthy 8lbs 13oz. After he was born we all realized dad had stepped out of the room as it seemed like we had more time!! We hollered for him to come back in and when we told him the baby had been born, he could not believe us! What a fun time for all! Thank you, Tiffany and Desmond, for allowing me to serve your incredible family! I know home birth was not your initial plan but I’m so glad it was everything and more than you had imagined! 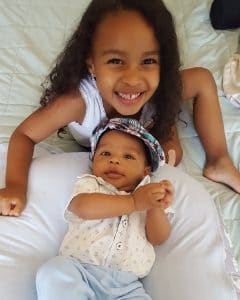 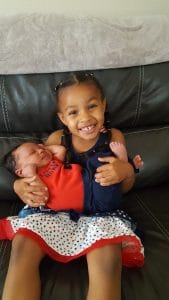 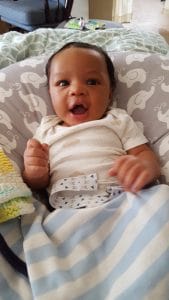