I have had the privilege of knowing Ashley for several years before she even knew this pregnancy was a possibility. I was honored when she asked me to be the midwife for her second baby and could not wait until the day I got to meet this sweet baby! Ashley had an unfortunate condition known as hyperemesis gravidarum with her first baby and was nervous about how this pregnancy would progress. Things seemed to be moving along fine until about 6 weeks when the nausea and vomiting kicked in. We tried a myriad of different natural remedies and medications until we got her to about 20 weeks where things seemed to stabilize (though she still had to take medications daily). This nausea and vomiting was already better than her first pregnancy and we were hopeful she’d get to have her home birth after all! Everything else about her pregnancy seemed to progress as usual until her 36th week when I received a message from her about her hands and feet itching badly. I immediately jumped to the most easily assumed diagnosis of Intrahepatic Cholestasis of Pregnancy (ICP) and began running a long panel of labs and BPP’s (Biophysical Profiles). This condition causes mothers to have high levels of bile salts and the body “gets rid” of these salts through the skin and it manifests with severe itching on the palms and soles of the feet. If the bile salts get too high, it exposes baby to the risk of stillbirth so it is vital that mom and baby are watched very closely. Fortunately, everything came back perfectly normal but Ashley’s itching only seemed to worsen. We put her on a liver strengthener herb three times a day and prayed hard that she would make it to full term! The herb seemed to make a significant difference in her itching and for a couple weeks, her labs decreased and we were optimistic, all the normal labs and decrease in itching was just buying us more time! However, by the time 39 weeks rolled around and we checked her labs again, she was one point over where she needed to be to safely stay pregnant and we had to schedule an induction. I agreed to strip Ashley’s membranes on Friday but we decided that if delivery was not complete by Monday, she would see another midwife in clinic and an induction would be scheduled for that afternoon. The prayers began flowing even more as I sent Ashley home for the weekend hoping for a beautiful home birth! All day Saturday I waited anxiously to hear from Ashley. I had three other moms due during this time so I knew potentially this could be a busy weekend! Saturday came and went and I chose to go to bed early not knowing what the night would bring.

I received a call from Ashley’s husband around 7:30am, I had just been woken up 30 minutes earlier by another potential labor call so when I saw Ashley calling, my heart jumped! Zach said she woke up in labor around 6:30am and things seemed to be intensifying. Her contractions were still 5-8 minutes apart so I asked Zach to call me back when they got closer to 3-4 minutes apart, her water broke or if she was feeling the urge to push. About 30 minutes later as I was getting ready, I got a call from Zach that her water had just broke but she had no urge to push. I jumped in my car and started heading to her house when Zach called me back to tell me she had the urge to push now! I told him to help her breath through the contractions and try her hardest not to push and I was on my way. I arrived at 8:20am to find Ashley laboring actively in the pool and squeezing her husband’s hands tightly. A contraction began to wash over her and I could audibly hear Ashley pushing, she began to scream with the intensity and I reminded Ashley to growl or moan instead of screaming so we can reduce stress for her and baby, she took the instructions and ran with them! She did amazing! I set up for the birth, listened to baby (who sounded amazing) and waited for my team. With the next contraction, Ashley pushed hard and I could feel baby move down well. Ashley asked for her mom to come down and within seconds her mom was at her side. It was so special to see all the awesome support she had between her husband, mother, mother-in-law, doula and midwife! As the next contraction calmed down, my first assist walked in to the room, she helped me get ready for the birth and the next contraction quickly arrived. Ashley pushed even harder with this one and baby’s head was born! Ashley’s mom gasped and covered her mouth in amazement and it made my heart so happy that she was getting such a great privilege! With the next push sweet Clarette was born! She had a head FULL of dark hair and the awe in the room was palpable! Ashley brought baby to her chest and began her recovery and surprise that she had finally done it, it was over! I remember her telling me how much it hurt but how glad she was to not be pregnant anymore! Sweet Clarette joined us at 8:56am weighing in at 8#7oz, welcomed by her sister Aribelle, daddy Zach and mommy Ashley, welcome sweet love! 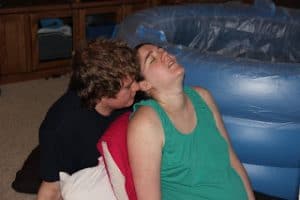 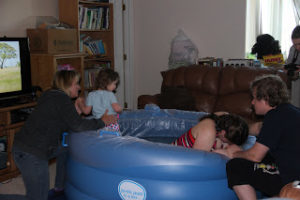 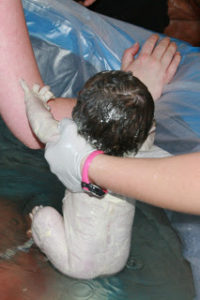 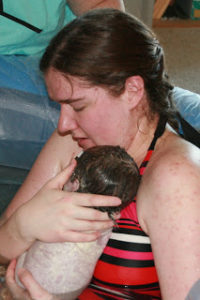 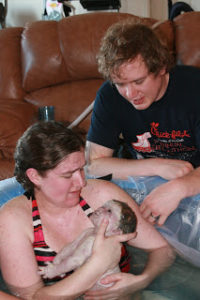 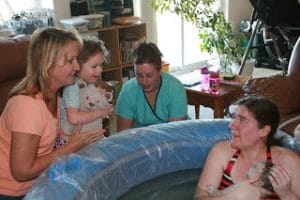 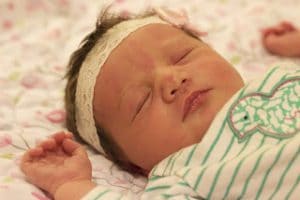 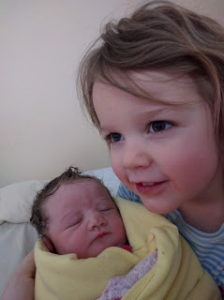 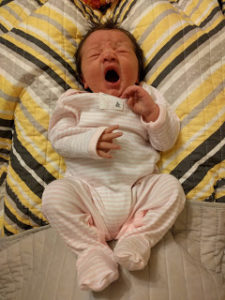 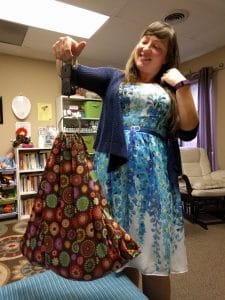