I met Autumn at the Colorado Birth Network birth fair in March and we could not have been more excited to find each other! Autumn was seeing an OBGYN but had a home birth with her last baby years before and had always wanted a home birth with this baby but she could not find anyone who took her insurance. Lo and behold, I took her insurance and we were able to set an appointment right away!

Autumn was already one week and four days past her due date when she called to let me know she was in labor and she was ready! It was 2am and when I arrived, Autumn was early in labor but moving along quickly. Within an hour of my arrival, Autumn was in active labor and the rest of my team was called. We set up the pool and waited patiently as little Archer made his way into this world. I knew he would be a big baby because mama already had a few big babies in her past but she was laboring quickly and he was doing so well! Soon the pushing commenced and we waited patiently as Archer slowly made his way from one world into this one. After several position changes and great pushing efforts by mama, little Archer made his debut and found himself in his mama’s loving arms at 5:21am! It became clear when I picked him up to hand him to mama that he was well over 10 lbs! After an hour of bonding and recovering, the big moment arrived, Archer weighed in at a shocking 12lbs 5oz and was so loved and anticipated by all of his family! What a beautiful, natural birth of such an amazing baby boy! 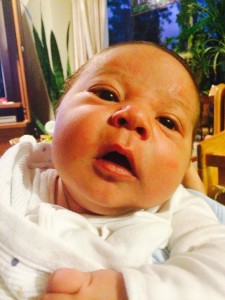