There are very rare cases where I can take a late transfer in as my practice is normally too full to bring more mama’s on but for this mama, I happened to have a slot open! She had had a very normal low risk pregnancy and figured since everything had gone so well, she needed to have a home birth! We hit the ground running getting her settled into the practice and it was a good thing because this baby decided to be VERY prompt! The short time I had with Dani before her baby arrived was so sweet and our connection was deep right from the beginning! I could tell Dani was going to be amazing and I could not wait to see her bring her baby into the world!

As I mentioned, this baby decided that she was going to be very prompt and on her due date, I received a text from Dani that she was contracting pretty consistently and felt she was in early labor. Since the average mama labors for approximately 24 hrs I figured we would have a baby the next day but as Dani and Matt kept me updated, it became very clear things were progressing quicker than that! I decided I should go check on mama with the reports Matt was giving me and when I arrived, I could not believe how calm they both were!! Dani was in the tub and I could tell she was very close to pushing! I got set up and talked with Matt about his desire to catch baby! Dani began to push more aggressively and with each push, she brought her sweet baby closer to this world! Finally, baby began to crown and Dani helped to slowly deliver baby’s head and with the next push, baby quickly delivered into her daddy’s arms! I didn’t realize how fast Matt had to jump up to catch his baby but baby practically flew out once her head delivered but Matt was on it and caught his sweet baby with ease! Dani quickly flipped over and brought her sweet baby to her chest! She was finally done and truly made it look so incredibly easy!! Sweet baby Victoria was welcomed into this world weighing in at 7lbs 12 oz. I was so impressed with both of them for not having had their entire pregnancy to prepare for this moment, they literally did it as if they had done it dozens of times before! Congratulations to Mama and Daddy and their sweet, new addition! I cannot thank you enough for trusting me with this very special time in your lives, what an honor it was to serve your amazing family! 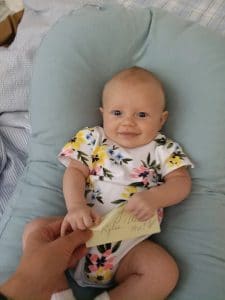