Dora was one of my more fun and unique cases, I met her at 34 weeks pregnant after she decided she did want a home birth for her third child and wanted to transfer care from the midwives she was seeing in Denver. It is not very often that I take transfer in’s so late in care as I am usually booked solid for the month way in advance of that month! But it was meant to be as I had one slot left for this awesome mama! This family had an interesting history and I loved learning about them for the few short weeks I had them! They had had their previous child at home but due to his heart defect, they were concerned about having another home birth but once this baby’s heart checked out, they were ready to do it again! We all waited anxiously to find out more about this baby and their gender!

I received a call around 1:15am from Dora’s husband that she was laboring and ready for me to come. Though her contractions were close together, they were short but something in my gut made me decide to go. When I arrived Dora was very active, walking all around their room in between contractions. She was coping very well. I timed a few contractions and confirmed that yes, they were close together but only about 30-50 seconds long. It was strange that the pattern was active but the duration was not! I decided to keep an eye on her and give her the space she needed to labor since she and baby were doing so well. My team arrived and we set up downstairs where her pool was being set up. A few hours in, Dora was getting tired and ready for the pool. We got her all set up and allowed her body to labor. Her contractions (which had increased in duration with the great frequency she had) seemed to space out. Sometimes this can be normal once the woman’s body reaches 10 cm as a way of giving her a break before the pushing commences. Dora was very concerned about the pushing as she remembered not being able to push effectively with her last baby and as she put it had to “scream” him out to get the intensity she needed. I had hoped this time she could save her voice and her body would help her! About an hour after Dora got in the pool, her contractions had spaced out to 5-6 minutes apart and barely 60 seconds long. I was searching my brain for what her body might need! I contemplated having her get out of the tub for a bit but it seemed to me like she was pushing occasionally so she should be complete for sure! Dora turned over with the next contraction and I swore I could see the top of baby’s head so I asked her if I could check. Sure enough, baby was crowning (though Dora was not able to fully tell, she had some great endorphins on board)!! I encouraged her to push aggressively now as they woke up their two older children. Dora pushed with all her might, though she reminded me how exhausted she was as she had been up all night! I reminded her how strong she was and encouraged her to keep up the good work. Her children arrived and Dora did wonderfully explaining what they would see. Her children were so supportive and at one point her son said to her, “take deep breath-es mom.” It was so sweet watching her labor unfold with her family around. Dora continued to push as baby slowly made their arrival. Finally, Dora pushed baby’s head out and we waited for the next contraction to deliver the shoulders. I knew this would be interesting as her body had spaced her contractions to 5-6 minutes apart. I had hoped her body would give us one more close contraction so we could get the rest of baby delivered with its help since Dora was so exhausted but we waited and waited and nothing. The rest was good for Dora but, we needed to deliver baby; so I encouraged Dora to push with all her might. We flipped her on her hands and knees to really open the pelvis and Dora gave it everything she had and finally, baby slipped into the water and Dora was done! Immediately, baby gave a loud cry as Dora turned over and brought baby to her chest. She did it!! And we got to find out that they had their second girl! Moriah was born at 6:51am on 6/7/16 to her amazing parents, great-aunt and sister and brother. There was no lack of love for her! Thank you for honoring me by allowing me to be with you during this very special moment in your lives! 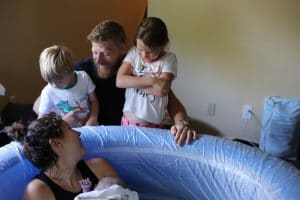