I met Lauren in her first trimester when she and her husband decided they wanted to have a different birth experience with their next child. Her first child had been born in the hospital setting and while the experience was good, she knew if she had had the right support, she could have had the natural birth she desired and knew she would find that with home birth! Lauren’s pregnancy progressed beautifully and baby was being very cooperative on every level! Lauren’s first baby was over 9 pounds but with measurements and feeling baby’s size, I knew he would not be 9 pounds at all! Lauren went past 41 weeks with her daughter so we knew she would likely go past that date as well so we waited patiently as we moved past her 41 week mark!

At 41 weeks and 3 days, Lauren had her graduation ceremony for her bachelors and was determined to walk in the ceremony! The night before her daughter was sick and Lauren noticed some contractions starting as she was laying with her. She ignored them and continued through her day making it to her graduation ceremony and even some time with family but throughout the day her contractions increased in intensity and frequency and she knew today baby would be born! I received a call at 10:45pm from her husband Shane that the contractions were really intense and she may be feeling the urge to push, so it was time for me to come. I arrived at 11pm to find Lauren laboring in the tub. She was so calm through each contraction but kept telling me how hard it was not to push! She labored for a bit longer in the tub and decided to move to the bed as she was uncomfortable and we would not be able to get her pool up in time. She labored in the bed and I could tell it was hard not to push with each peak. Eventually, the urge became so strong, she began to push with each contraction and her water broke! My lovely assistant Chelsea walked in in just enough time to grab the stethoscope as Lauren gently pushed baby’s head and body out with the next contraction! Baby Kingston delivered at 11:31pm weighing in at 8#3oz, almost a pound smaller than his sister! Lauren did incredibly staying so calm when things were so intense, it was amazing to watch! Little Kingston was welcomed by his three older sisters and family and is so well loved. Welcome to the world little one, thank you for allowing me to be present for your arrival! 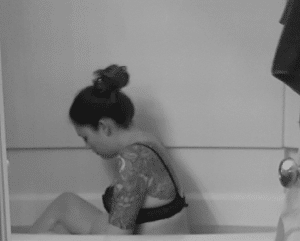 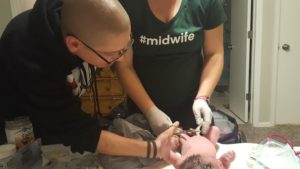