I met Caroline early in this pregnancy when she and her husband decided they wanted something different for this baby’s birth than they had had with their previous deliveries.  While her previous hospital experiences weren’t the worst, and Caroline had even had the privilege of delivering with a midwife the second time around, she wanted to have a consistent provider with her and wanted her birth to be as non-interventive as possible. As a CNM doing out of hospital birth, it is always my goal to allow mama’s bodies to do what they are supposed to and Caroline was no exception! It was a blast watching her pregnancy unfold! Much to our surprise, after having two babies before 38 weeks and her second before 37 weeks, this little one apparently wanted all the time she could take to cook! Caroline’s body had a trial run at 38 weeks and 2 days that fizzled out and for a week, Caroline worked with her pre-labor (prodromal labor) allowing her body to do what it had not been allowed to do for her previous deliveries, to deliver without Pitocin augmentation. There were several texts and a couple of phone calls back and forth encouraging Caroline that her body knew exactly what to do and she would soon meet her baby! Finally, the excitement hit when on Thursday, she started having consistent contractions and bloody show! It seemed like her body was getting ready and labor would kick in! I encouraged Caroline to rest when she could and waited for the call!

At 4:20am, Caroline’s husband Chance gave me a call. Two hours previously, things had started getting closer together and more intense and now Caroline was feeling more pressure and sometimes an urge to push. We were all relieved that this was the big moment we had all been waiting for! When I arrived to Caroline at 4:45am, baby sounded wonderful and Caroline was VERY clearly in active labor, another sigh of relief after a week of wondering what true active labor was and what was pre-labor! Caroline decided to change from laboring on the floor to laboring on the bed and I supported Caroline as she allowed her body to carry her through her labor! She was beautifully laboring and truly handled it with such poise! I was very impressed! Within 15 minutes of my arrival, Caroline began to have stronger urges to push and with one stronger contraction, her water broke. Immediately, baby began to crown and I encouraged Caroline to reach down to help ease her baby out and she did great! Baby’s head delivered and with the next contraction, Caroline was able to bring her sweet baby to her chest and dad was able to announce they had their second girl! Gwendolyn was born at 5:05am into her mama’s arms and with a thick head of beautiful hair! She weighed in at 7#14oz and was welcomed by her sweet big brother who woke up shortly after her birth! What a joy it was to help Caroline redeem her body and her births, to show her that her body could birth without Pitocin and knew exactly what it was doing! It was an honor to be present for your birth Caroline, thank you for including me! 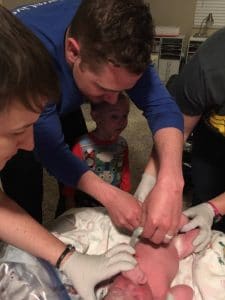 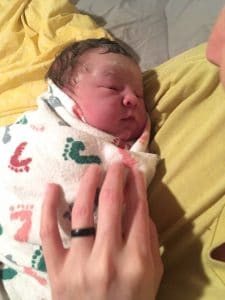 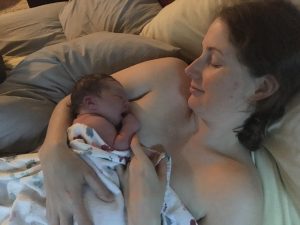