I met Jesi at the beginning of her pregnancy when she found out I took Tricare. She had had her daughter in a free standing birth center before but seeing as the closest birth center was an hour away, she was excited to go a different route and chose home birth for this next baby.

Jesi’s pregnancy progressed uneventfully and it was beautiful to watch her body change shape and her belly grow making room for the sweet life growing in her! Jesi and her husband had a long history of having girls so they were shocked and excited to find out they were having a boy this time around! It was fun getting to share in the great news!

Jesi had had several episodes of pre-labor throughout her final weeks pregnant and had a feeling this baby would come sooner than her daughter who was born over a week late. I encouraged her to keep me posted but we were truly all prepared for the pregnancy to go late again. On November 07 (Jesi’s due date), I received a call update from Jesi at 8:45pm telling me that her contractions had been steady for most of the evening and that she was having bloody show but that she would keep me posted when she was ready for me. I decided to go to bed around 9:30pm knowing this may be a longer night (Jesi’s previous labor was very long, so we were preparing for anything). Around 10:00pm, I received another call from Jesi, this time, she was breathing heavily through her contractions and could not get her words out to me! I asked her if she was ok, and she told me she thought she’d have more time between contractions to talk to me! We talked for the next 10 minutes and I could tell her contractions were about 2-4 minutes apart so I asked if she was ready for me to come, she said not yet, but that she would call her doula. I was shocked! She sounded like she was very much in active labor but I knew she felt like she did not have enough control in her last labor, so I agreed to let her tell me when she was ready, that was important to her. I fell asleep for what seemed like 2 minutes before my phone rang again, it was 11pm and Jesi’s friend was on the phone this time. I could hear Jesi in the background and jumped out of bed before her friend even told me to come. Jesi’s doula had not quite made it yet so I knew I needed to get going (fortunately, her doula walked in right after they hung up with me)! Jesi lived about 30 minutes from me, so I drove carefully but quickly to her home. I arrived around 11:30pm with both of my assistants pulling in shortly after myself. When I stepped into her bathroom (she couldn’t get the birth pool filled in time), Jesi was calm but I could tell she was grunting with each contraction. I checked on her and baby and everyone was doing great! Over the next hour, we supported Jesi and encouraged her to listen to her body. It seemed to go so quickly, I couldn’t believe it had been an hour! About 15 minutes before delivery, Jesi changed positions and it seemed like the intensity and urge to push picked up quite a bit and we all worked to help Jesi stay centered, she did amazing! As she was pushing, she kept saying “it’s going too fast, it’s too fast!” I would encourage her that everything was perfect and she was doing a great job though not knowing what she meant by going to fast in that moment (I found out later she felt the labor was going too fast because her last labor was so long, now it all makes sense!). Fifteen minutes later, baby’s head was delivered and this part, I will never forget. Baby was partly delivered but he was SO active and was turning and kicking mom from the inside and her facial expressions and reactions to him were priceless! She was so in tune with little one and she talked to him about his delivery and what was going to happen next, it was magical to watch! Jesi switched to her hands and knees and baby was quickly delivered thereafter! Sweet little Esben was placed in his mothers arms (by herself and daddy) at 12:36am on 11/08/2015 weighing a chunky 8#11oz! Jesi’s labor was less than 1/3 of her previous labor and she was so grateful! Her recovery was significantly better and watching her joy as she now cares for her little one tells me she experienced so much healing with this delivery! Thanks for letting me be a part of your story little Esben! 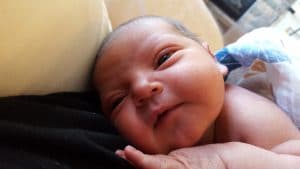 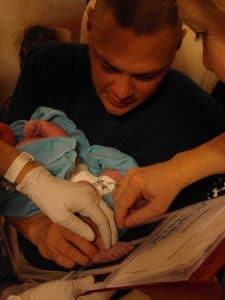 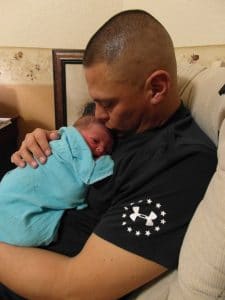 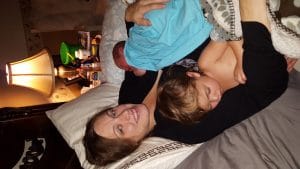