I met Lacey early in her pregnancy when she and her husband decided that after two hospital births, it was time to do something different, especially since their insurance covered it! Her pregnancy progressed somewhat normally aside from baby’s stubborn determination to be breech right up until the last second at her 36 week home visit. This visit was stressful for everyone and we were all SO relieved when baby was confirmed to be head down after being breech for so long! Now it was time to prepare for and get excited about her home birth! I saw Lacey at her 40 week appointment and we were hopeful baby would make his arrival later in the week following his sister’s delivery times.

I received a call from Lacey early Thursday morning letting me know she was in early labor. We talked briefly on the phone but I could tell it was just a little too early for me to come. I told her when to call me and encouraged her to reach out if she needed me. A couple of hours later I received another call from Lacey and though things had changed, it was still too early. We decided to wait just a bit longer. I went about my morning routine and was on an errand when I received a text from Lacey telling me she was starting to feel some pressure. I decided to head her way just to be safe and arrived around 8:40am to find her still in early labor. I listened to baby and checked on mom, both were doing great. I gave her some pointers and darkened the room. I told her I’d get out of her hair so her labor could progress but stayed within earshot. For the next two hours, we listened to baby and supported Lacey. I could tell things were getting serious around 9:30am when she got in the pool. We listened in on her sitting in the hallway and around 10:30am, the urge to push set in and Lacey began to complain that she couldn’t go on anymore and wanted an epidural. We all got excited as we knew delivery was close! I reminded Lacey of this and off she went pushing! 10 minutes later of good consistent pushing and baby’s head delivered! Lacey felt immediate relief and gave one last strong push to deliver baby the rest of the way, she was done! Lacey immediately tried to flip over to grab her baby but the cord was short and we had to have some fun flipping her over the cord so she could take little one into her arms! Baby was calm and stared lovingly into mama’s eyes as they both recovered! Baby Cooper was born at 10:43am weighing in at 8#8oz and Lacey’s biggest baby yet! Welcome to the world sweet love, thank you for allowing me to share in this special moment! 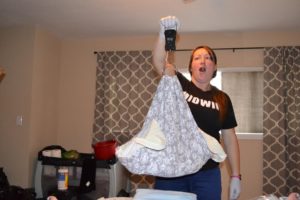 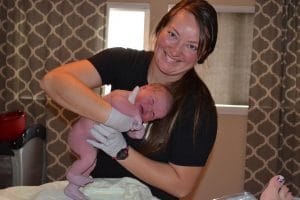 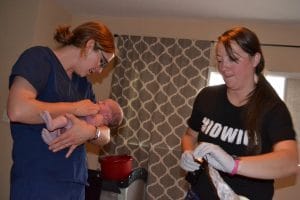